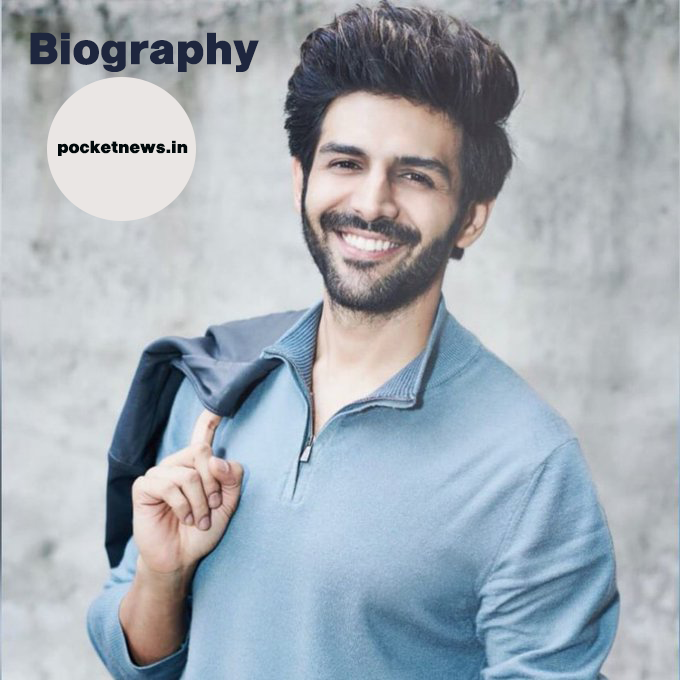 Let’s know biography of Kartik aryan :/ Kartik Aryan is an emerging actor of Indian cinematography. This young actor has achieved strong female fan following in a very short time. Apart from acting, he has also done modeling. This actor has got recognition from the film “Pyaar Ka Panchnama” . In which he played the role of “Rajat Mridul” (Rajjo). It was a romantic comedy. In today’s time, the Bollywood industry is as much as the TV industry. So in keeping with this, Karthik also played the role of co -host at the 2018 IIFA Awards and the 2019 Zee Cine Awards .

Karthik Aryan (real name: Karthik Tiwari) comes from a middle class Hindu family. He was born on 22 November 1988 . His birth place is Gwalior, Madhya Pradesh (India) . Kartik Aryan’s parents are both doctors by profession. His mother’s name is Mala Tiwari and he is a gynecologist by profession. And father Manish Tiwari is a pediatrician. Karthik also has a sister named Kittu .

He started his early studies in Saint. Paul’s and Kiddies’ School, Gwalior. Karthik used to dream of becoming a successful actor ever since he practiced in the 10th standard. As soon as he passed his 11th standard examination, he shifted to Delhi in search of work. But he soon realized that if you want to step into Bollywood, you will not be able to tell as much as Delhi. Then he decided to grow more towards the city of Maya Mumbai.

Karthik Aryan decided to shift to Mumbai to pursue his career, due to less acting opportunities were available in Delhi city than Mumbai. In Mumbai, he joined DY Patil Collage, Navi Mumbai . There he started practicing to do B.tech in Biotechnology . He chose a college where he would not have to give regular attendance, so that he could easily go to acting auditions in the city. Karthik Aryan arrives every day for an audition after hitting his college lecture. Due to good Nain Naqsh, he adopted him in the modeling world before acting.

This actor made his debut in the year 2011 with the film “Pyaar Ka Panchnama”. This film was made by Luv Ranjan. The film did good business and Karthik’s acting was also well received. In the film, Chris worked 29.5 minutes of monologue who performed was a record for a Bollywood film at that time | This became the highlight of the film.

In the year 2013, Katik appeared in a film named “Akash Vani”. He then worked in Kanchi: The Unbreakable in 2014. Both these films proved to be cold but the market of these people got hotter day by day. The turning point of Karthik’s career came in the year 2015. Pyar Ka Panchnama 2 (2015) proved to be a big hit at the box office. In this film, he went a step ahead and delivered a 7.80 minute monologue. Odin also liked this sin very much.

Karthik acted in a comedy film in the year 2018. Whose name was “Sonu Ke Titu ki Sweety”. The film became one of the successful business films of that year. Now, Karthik Aryan had become an established high rated superstar. In the year 2019, he appeared in a film titled “Lucca Chuppi” with Kriti Shenan. It was a romantic love story.

Karthik likes to eat Aryan Cumin Rice and Sindhi Curry. Apart from this, they like Pavbhaji, Chole Bhature, Gulab Jamun, Carrot Halwa, Risotto and Sty Fried Vegetables. This skilled actor is a strong fan of Akshay Kumar, Shah Rukh Khan, Ranbir Kapoor and Amitabh Bachchan in the film industry. Apart from these, Alia Bhatt, Deepika Padukoun and Priyanka Chopra are very fond of them. Karthik likes to go to Canada, London and Kolkata for a walk. Talking about their favorite colors, black, white and blue color are more preferred. Rokstar, DelhiBailey, Gangs of Wasseypur and this youth is crazy film.

Karthik Aryan left her first girlfriend just because she wanted to become an actress. There were also rumors that Karthik is dating his film Pyaar Ka Panchnama ‘s female actor “Nusrat Bharucha” . After this the name of this handsome hunk was also associated with Fatima Sana Shaikh (Dangal Girl).

Facts related to Kartik Aryan – Facts about Kartik Aryan
Karthik Aryan’s friends affectionately call him Koki.
He is very fond of football, video games, photography and writing.
Karthik’s mother affectionately calls him Guddu.
Karthik Aryan would have liked to play the character of Ranbir Kapoor’s Rokstar and Yeh Jawani Hai Deewani.
This actor considers Akshay Kumar his role model.
If Karthik was not an actor, he wanted to become a scientist.
Karthik did not talk to his parents about his passion for acting until he got work in the first film.
Karthik used to go to auditions after hitting class bunk. Once a teacher said: If you tell me what my name is, I will pass it to you but Karthik did not know his name and he spread it to Karthik.
Director producer Love Ranjan contacted Karthik Aryan on Facebook. Then he called and told that I am casting Aap in the film “Pyaar Ka Panchnama”.