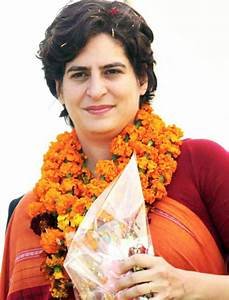 Priyanka Gandhi Vadra may make her electoral debut as the Congress candidate in Uttar Pradesh’s Varanasi against Prime Minister Narendra Modi, in what promises to be a blockbuster contest in the national election.

“The chances are 50-50,” Congress sources have told NDTV, revealing that discussions are on between its top leaders.

Sources say Priyanka Gandhi’s mother Sonia Gandhi, former Congress president, is among those who have reservations about sending her to battle in the very first election after she joined politics. But the sources add that Priyanka Gandhi has conveyed strongly that she is not worried about winning or losing.

Priyanka Gandhi and her brother Rahul Gandhi, the Congress president, have dropped hints about a gigantic Varanasi clash. Since Sunday, Priyanka Gandhi has said at least twice that she would contest from Varanasi “if the party asks me“.

The 47-year-old joined politics in January, and was quickly appointed one of the two general secretaries in charge of the Congress campaign in Uttar Pradesh, India’s most politically vital state with 80 seats. Her launch was aimed at galvanizing the party in a state that once gave the Congress many prime ministers but has over the years moved on to other big players.

Priyanka Gandhi was given charge of eastern UP, which includes Varanasi.

Her three-day boat campaign last month ended in Varanasi, which, to many, justified talk that Priyanka Gandhi and Rahul Gandhi had something big planned for the holy town that voted PM Modi to parliament in 2014.

Priyanka Gandhi has said nothing to lid the rumours. During an interaction with Congress workers who wanted her to contest from Raebareli, her mother Sonia Gandhi’s constituency, she said: “Why not Varanasi.”

While campaigning in UP, Priyanka Gandhi has often spoken about what she calls PM Modi’s neglect of Varanasi as he roamed the world. “I was stunned to hear from people in Varanasi that in five years, the PM didn’t get time to go to a single village, visit even one family in his constituency,” she has said in rally after rally, accusing PM Modi of running a government indifferent to the poor.

Last week, Rahul Gandhi, to a question on whether he planned to field his sister against PM Modi, told The Hindu newspaper: “I will leave you in suspense. Suspense is not always a bad thing.”

Fielding Priyanka Gandhi in Varanasi would be aimed at confining PM Modi, the BJP’s top campaigner, to one constituency.

Pitting Priyanka Gandhi against PM Modi would also be seen as a statement of serious intent from the Congress and sources said opinion is divided on whether it would make an impact on the overall chances of the party.

In 2014, the Congress had fielded Ajai Rai against PM Modi. He had finished third in the contest, after PM Modi and Aam Aadmi Party’s Arvind Kejriwal, who polled around 2 lakh votes – way behind the Prime Minister’s 5.8 lakh.

Nominations for Varanasi can be filed between April 22 and 29; the temple town votes on May 19 in the last phase of the national elections.