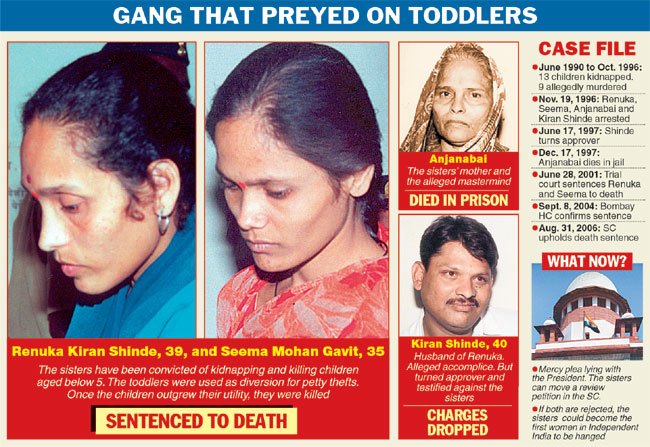 About two sister Seema Gavit and Renuka : There have been many such serial killing incidents in the history of which people still shiver. Today we are telling you about one such serial killer who has crossed all limits of humanity. We are talking about two serial killer sisters, Renuka Shinde and Seema Gavit. Both these sisters used to hunt small children. After kidnapping the children, these two sisters did not hesitate to do their ruthless killing.

Renuka Shinde and Seema Gavit kidnapped children from 1990 to 1996 from cities like Pune, Thane, Kolhapur and Nashik. According to media reports, the chain started when Renuka was caught stealing in a temple in Pune in 1990 and escaped under the guise of a child. When Renuka was caught stealing, she also had a newborn baby. Due to the same newborn child Renuka gained the sympathy of the crowd and ran away.

It is said that the child had thought of theft since then. Renuka then kidnaps the children along with her sister Seema and mother. When the children grew up and they were no longer of any use to them, these women used to murder them brutally.

In 1996, he was arrested by the police from Nashik on the charge of kidnapping a child. During the interrogation, everyone was surprised by the murders which the women were opening in front of the Raj police. These women kidnapped about 13 children from several cities and killed 6 of them.

It is said that Seema killed a seven-month-old baby by throwing it to the ground just because he was not getting silent while crying. At the same time, the head of a two-year-old child was killed by slamming it against the wall. Then cut it into small bags and then saw the picture in a cinema hall in Kolhapur.

After being caught by the police, Renuka’s husband Kiran Shinde helped the police by becoming a government witness. At the same time, his own lawyer had called the mother of both sisters, Anjana, the main conspirator, who had brought both of them into the world of crime. However, the mother of these two sisters died in 1998 due to illness.

On 29 June 2001, the sessions court found Renuka Shinde and Seema Gavit guilty of kidnapping 13 children and killing 6 children. On 31 August 2006, the High Court sentenced these two serial killer sisters to death, before which no woman was sentenced to be hanged in post-independence India.

With the court’s decision, these two sisters became the first women to be hanged in independent India. He then sent a mercy petition to the President on 14, August 2014. The then President of India was Pranab Mukherjee, who turned down his mercy petition. Currently, these two serial killer sisters are waiting for their hanging in Yerwada Jail in Pune.