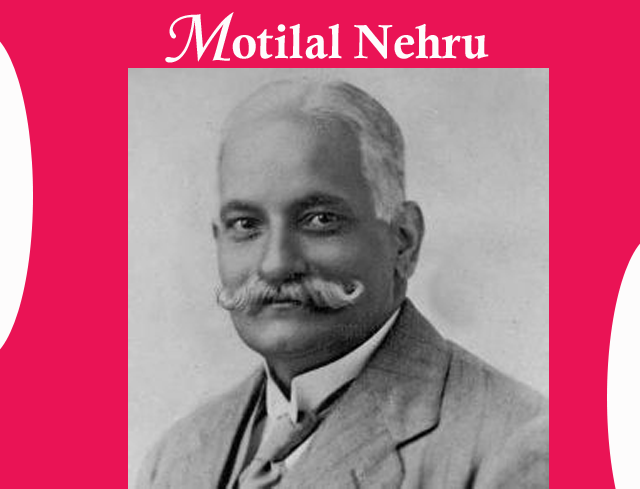 biography of motilal nehru. biography of motilal nehru waves.
India’s famous political leader Pandit Motilal Nehru was born on 6 May 1861 in Agra, 3 months after his father’s death. Elder brother Nandlal, who practiced in Agra, took care of him. Till the age of 12, he studied Arabic and Persian at home. Then got education in Kanpur and Allahabad. After passing the “High Court Lawyer Examination” Motilal Nehru started advocacy in Kanpur and then moved to Allahabad.

Within a few days, he was counted among the top and most accomplished lawyers. He adopted Western way of life. He was the first motorcar to come to Uttar Pradesh. Motilal ji (Motilal Nehru) married Swaroop Rani at the age of 22 due to the death of his first wife during childbirth. He had sons Jawaharlal Nehru and daughters Vijayalakshmi Pandit and Krishna Hathi Singh. Apart from earning prestige and wealth in advocacy, Motilal Nehru was also interested in public works.

He attended the 1888, 1892 and 1905 sessions of the Congress. He became more active after the break-up. He presided over the first provincial political conference of Uttar Pradesh in 1907. In 1908, he was elected a member of the Council of United Provinces (now Uttar Pradesh). There he got an opportunity to introduce his legislative talent. Even while belonging to the Congress, Motilal Nehru had friendship with the British officers. Motilal ji was also invited to the Delhi court in 1911, in which the fifth George of Britain came.

On this occasion, clothes, hats, etc. were worn by the famous tailor of London. Jawaharlalji was then in London and he sent these things. But the change that was coming in the political field of the country also had an impact on Motilal ji. After coming to India from London to study, Jawaharlal started taking interest in politics more than advocacy. Meanwhile, Annie Besant formed the “Home Rule League”, both father and son became its members.

In the First World War (1914-18) Indian leaders helped the British but at the end of the war, a black law like “Rowlatt Act” was implemented to suppress its feelings in return for giving rights to India. When the countrymen protested peacefully, they were oppressed. Its most heinous form was the massacre of Jallianwala Bagh and the events in Amritsar. Motilalji, who till now was the leader of the soft views of the Congress, completely changed and he had no faith in the integrity of the British.

Gandhiji’s path of movement and his path became one. In 1919, the Amritsar session of the Congress was presided over by Motilal Nehru. He was the only prominent leader in the 1920 Kolkata Congress who supported Gandhiji’s non-cooperation proposal. Now his life changed overnight. He gave up advocating. Sold horses and vehicles. The wine was completely removed. Holi of foreign clothes was burnt in full of cheeks. Khaddar’s dhoti kurta sparkled his new look.

Anand Bhawan became the resting place of the Congress volunteers. The man of royal living volunteered for the country as a fakiri. In 1921 Motilalji was the Secretary of the Indian Congress. He was arrested and sentenced to six months for boycotting the visit of the prince of Britain to India. After the Chauri-Chaura incident, Gandhi decided to suspend the movement and formed a “Swarajya Party” to continue the struggle within the legislative institutions.

Motilal Nehru, elected on its behalf, became the leader of his party in the Central Assembly and continued to trouble the British officers with his sharp lines. After the boycott of the Simon Commission, a draft Constitution was chaired by Motilal on behalf of India. Motilal ji presided over the 1928 Kolkata Congress. When the government did not accept this draft, in the Lahore Congress of 1929, India declared complete self-government as its goal. The president of this Congress was Jawaharlal Nehru.

Motilal Nehru donated his magnificent “Anand Bhavan” (the present Swarajya Bhavan) to the nation in 1930 when Gandhiji was marching to Dandi for the Salt Satyagraha. Motilal ji was accompanied by Jawaharlal, Swarooprani, Kamala Nehru, Vijayalakshmi Pandit, Krishna and Motilal ji’s son-in-law Ranjit Sitaram. All were arrested. Motilal Nehru was unwell. He was released. He was brought to Lucknow due to lack of X-ray facility in Allahabad. He died on 6 February 1931.