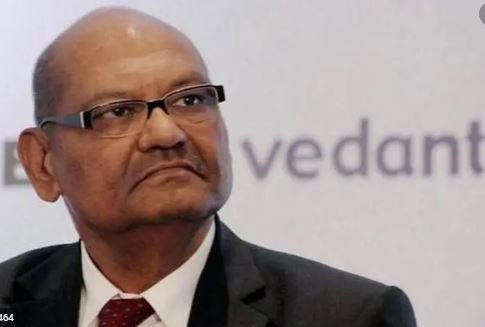 Anil Agarwal (Anil Agarwal) Vedanta (limited) Resources Ltd. (Vedanta Resources Ltd) the Chairman and founder of the | Words are less in praise of this successful businessman who started his career as a Scrap Dealer at a young age. This talented entrepreneur is not only specializes in good business, He freely charity – Philanthropy ( Philanthropy) received honorable place in society by | Through the Vedanta Foundation , he has made unforgettable contributions in India on fundamental areas like health, employment, environment and literacy. The Vedanta Company has not remained untouched by controversies. Come on, Talk about the highlights related to the journey of this entrepreneur of exceptional stature in Metal Industry..

Early Life – Early Life
Anil Agrawal was born on 24 January 1954. His birth place is Patna, India. He is currently based in London, England. His father’s name is Dwarka Prasad Aggarwal . He did his early studies at Miller High School, Patna and Shri Ganesh Dutt Pataliputra High School. After that he went to Malaviya Regional Engineering College for further studies. Anil Agarwal’s father Dwarka Prasad had a small business as an aluminum conductor . He also worked in his father’s business. After some time he came to Mumbai with dreams of big business.

Anil Agarwal started the business of Scrap Matirial in the mid-1970s. He would buy scrap material from cable companies and sell it in Mumbai Maharashtra. After that, in the year 1976, Anil Agarwal took a loan from the bank and acquired Shamsher Sterling Corporatio n. This company used to manufacture copper. For almost 10 years, Anil took these two businesses forward well.

In 1986, he opened a Jelly-Field Cable making factory. Which led to the establishment of Sterlite Industries . In no time, Anil realized that his profitability in this business was very low. Since the price of copper and copper used to go down very fast. For this reason, he thought to control the input cost of these metals and started manufacturing the metal himself.

In 1993, ” Sterlite Industries’ ( Sterlite Industries) was the company’s first private sector of India to set up Cooper smelter and refinery | After that, in the year 1995, Sterlite Industries acquired a loss making company “Madras Aluminum” . Then this company was closed by BIFR ( Board for Industrial and Financial Reconstruction ) 4 years back.

When the disinvestment program was announced by the Government of India in the year 2001, there was a big opportunity in the hands of Anil Agarwal. At that time he acquired a 51% percent stake in BALCO ( Bharat Aluminum Company ) . The following year, he acquired a 65% per cent stake in HZL ( Hindustan Zinc Limited ) . Both these companies were considered less profitable and inefficient mining firms.

Anil Agarwal and his team went to London to set foot in the International Capital Market. There, in the year 2003, he included Vedanta Recources Plc . In this way, “Vedanta Resource PL, C” became the first Indian company to join the London Stock Exchange. On 10 December 2003, internal re-formation process took place in Vedanta. Through this process of ” Vedanta Recources Plc ” the group Group Kpanion Parent Company became |

In the year 2004, Vedanta Resource PLC He acquired Konkola Kopper Mynus (Zambia). Thereafter, in the year 2007, Vedanta Resources acquired a controlling stake in Sesa Goa Limited , the largest iron producer and exporter in India. In 2010, Anglo American Minor acquired the Zinc Assets portfolio of South Africa, Namibia, and Ireland.In October 2017, it was announced that Anil Agarwal’s Volcan Holdings PLC (Volkan Holding Plc) acquires 19% stake in mining company “Anglo American”. With this, he became the largest shareholder of the company. The headquarters of Vedanta Resources is in Londan. The group aims to produce lead, iron, zinc, silver, copper ore, aluminum, oil, gases and power products globally. However, the largest portion of the wealth of this group is in India. Anil Agawal live in London poverty in India, employment, and Indian GDP Growth live working to | According to estimates of 2019 total Milkiyt of Anil Agrwal $ 330 million US dollars is |

Vedanta limiteCompany Information – Vedanta Company Information
Vedanta Company was established in the year 1979. The Head Quarter of this company is in Mumbai, India.
Vedanta Company was formerly Sesa Goa Limited. (Sesa Goa Ltd.). It is a mining company established in the country of India.
Vedanta Company trades in Chadi, Copper, Zinc, Aluminum, Lead Oil, Gais, Iron and Steel.
According to the assessment of 2017, there are about 60,000 employees in this company’s group.
According to the 2017 report, the Vedanta Company has a net income of 73.23 billion.
The chairman of this company is Anil Agarwal. And the CEO is Mr. Nivasan Venkatakrishnan. And CFO is Arun Kumar.
Charity – Philanthropy
In 1992, the Vedanta Foundation was established. Through which group companies can conduct philanthropic programs.
In the year 2013-14, Vedanta Group companies and Vedanta Foundation invested $ 49 million dollars for the development of schools, hospitals and infrastructure.
Granted for health, education and environmental protection, due to which more than 4.1 million people benefited in the lifestyle.
Personal Life – Anil Agarwal Personal Life
Anil Agarwal’s wife’s name is ” Kiran Agarwal “. This couple has two children. In which the son’s name is ” Agnivesh Aggarwal “. And the daughter’s name is ” Priya Aggarwal “.

Awards & Honors – Anil Agarwal Awards & Achievements (vedant limited)
In 2012, The Economic Times awarded him the “Business Leader Award“.
In the year 2009, Anil Aggarwal received the Mining Journal Lifetime Achievement Award.
In 2008, he was elected “Ernst and Young Entrepreneur of the Year”.
In the year 2016, The Asian Awards won her the “Entrepreneur of the Year” award.
Anil Aggarwal received the OGF Award in the year 2018. This award is given to a person having a strong social influence in the community.
Thought Section – Anil Agarwal Ideology
Our country India is not a capitalist nation. And it should never be a capitalist nation.
If the Left continues to thrive in natural mineral-rich areas of the country, then there will surely be a bad environment for investment.
The world wants India to remain an import-based economy. Where oil, gas and gold can be dumped. Many countries consider India as a big market in terms of trade.
Environmental civilization is active in the entire world against the resource industry. But we should also keep in mind that these entrepreneurs make products related to basic needs. On which human civilization depends. We need to find a natural solution to this problem permanently.
Controversy – Controversy
vedant limited : Failed to declare his participation in one of the worst industrial accidents in India’s history ( Failed to Declare Fault) Vedanta was removed from the International Safety Awards. In fact, in the same year last year, about 40 laborers were killed after a factory chimney fell . About which Miming Group Vedanta did not share information.
In 2004, a committee of the Supreme Court of India alleged that Vedanta Company dumped thousands of tons of “arsenic-bearing slag” near its factory in the state of Tamil Nadu, India. Due to which there was a bad impact on the environment. Another committee of the Indian Supreme Court alleged that Vedanta forced more than 100 families in the state of Odisha to forcibly move from their place of residence. It was alleged that to get the bauxite from that land, the Vedanta Company created an atmosphere of fear from the hired goons.
A lawsuit was filed against the Vedanta Company in Zambia (Africa). 2,000 people living there alleged that dangerous copper was dumped in the Kafu River, from the copper mine of Vedanta. Due to this widespread human diseases spread and many fish were killed in the water.
In 2014, Vedanta was accused of not paying proper fees to the Zambian government. Along with this, the company was also accused that the accident victims working there and the employees separated from the company are fighting for payment.